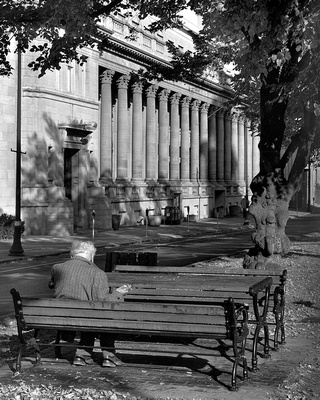 I made this photograph in Spokane Washington with a 4x5 view camera in 1989.  I had originally planned to photograph the row of columns as an architecture shot but as I was setting up my camera this old man came by and asked if I had a match so he could light the cigarette he had just found on the sidewalk.  I happened to have a match book in my car and gave it to him and wished him a good day.  He went to the park bench and sat down.  As I was composing my photograph I realized that this man made my photograph special.  Being young and shy I went up and asked him if he minded being in the frame of my photograph and he said that was fine.  I could see a metal checkerboard screwed into the top of the table and I could imagine a game with a couple of old friends.  He was a quiet man in the latter years of life.  I think from that moment on I have always felt that my best images have a human element within them.  When I made this print in the darkroom I realized it was the very first image that felt absolutely right from a technical, aesthetic AND emotional standpoint.  It was the beginning of my career.