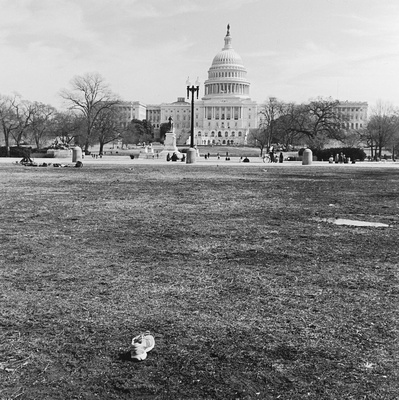 When I make photographs I never move anything.  I am making a document of my experience.  When I was recently in DC I was walking around near the capital building and found this left shoe sitting there.  It was still tied and pointed towards the dome.  I found myself wondering what had happened.  What drama had caused someone to abandon a single shoe?  Could the left shoe also symbolize the path between the White House and Congress taken by a democratic president?  Can anything be accomplished when there is only one side forcing the issue?  As I made this image I found myself nostalgic for the days when Tom Foley and Tip Oneil were in office.  By comparison, those days were down right friendly compared to the polemics of today's government.