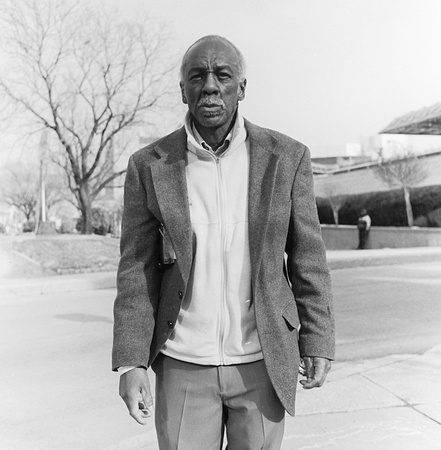 The first day I arrived in Baltimore I was warned of how dangerous it was to be downtown.  After three days of not heeding that advice I had seen some interesting things.  This city seemed like a larger version of the Bronx and I was definitely the interloper.  I did meet some fantastic people and I fell in love with the grittiness of "Charm City".  By the third day I was ready to pull out my camera and make a portrait of my experiences.

I saw this man standing on a street corner near Camden Yards.  He reminded me visually of the great photographer Gordon Parks.  He looked so distinguished to me in his slacks and tweed jacket.  I asked him if he would permit me to make a portrait of him.  He smiled and nodded yes.  I positioned him so the son wasn't behind him.  After I made the exposure I asked him for his name and address so I could send him a copy of it.  He struggled a moment to come up with a name and as he spoke I realized that he was missing most of his teeth and seemed to have difficulty speaking.  He declined my offer to send him a print.

I was touched by his gentle spirit.  Unlike many people I come across with a camera, he never asked me for anything and didn't even try to preach to me from the bible he was carrying under his arm.  I left Baltimore feeling profoundly grateful for the experience.